Riding from Boston to Albany, a few years ago, I found myself in a large car, well filled with passengers. The seat next to me was about the only vacant one. At every stopping place we took in new passengers, all of whom, on reaching the seat next to me, cast a disdainful glance upon it, and passed to another car, leaving me in the full enjoyment of a whole form. For a time, I did not know but that my riding there was prejudicial to the interest of the railroad company. A circumstance occurred, however, which gave me an elevated position at once. Among the passengers on this train was [Massachusetts] Gov. George N. Briggs. I was not acquainted with him, and had no idea that I was known to him. Known to him, however, I was, for upon observing me, the governor left his place, and making his way toward me, respectfully asked the privilege of a seat by my side; and upon introducing himself, we entered into a conversation very pleasant and instructive to me. The despised seat now became honored. His excellency had removed all the prejudice against sitting by the side of a negro; and upon his leaving it, as he did, on reaching Pittsfield, there were at least one dozen applicants for the place. The governor had, without changing my skin a single shade, made the place respectable which before was despicable.

The Inland Route refers to the primary east-west railroad line in Massachusetts, running between Boston, Worcester, Springfield, Pittsfield, and Albany, New York. The line links Massachusetts’ three largest population centers (Boston, Worcester, and Springfield) and is one of the busiest rail routes in the state, carrying MBTA commuter rail trains between Boston and Worcester, as well as freight service and Amtrak’s Lake Shore Limited route running from Boston to Chicago.

The Inland Route, formerly operated by the Boston and Albany Railroad and the New York Central Railroad, is one of the oldest railroad lines in the United States, having been completed between 1834 and 1841.

Since 1971, Amtrak has operated all passenger service west of Worcester, and the only passenger train currently operating on the line is Amtrak’s Lake Shore Limited, which runs once daily in each direction between Boston and Albany (continuing to Chicago), with stops in Framingham, Worcester, Springfield, and Pittsfield. Relatively frequent MBTA commuter rail service operates between Boston and Worcester.

More recently, MassDOT has begun to conduct another study focusing specifically on East-West service between Boston and Pittsfield. This study has not yet been completed or published, but MassDOT has it listed as a “Project Considered for Long-Term Rail Plan” in its [2018 State Rail Plan]. 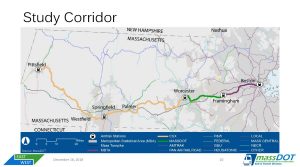 NNEIRI estimates that their proposed service improvements will cost between $1.1 and $1.2 billion, with ~$500 million going toward new train equipment and ~$700 million going toward infrastructure improvements. This estimate is for their proposal for Boston-Montreal and Boston-New Haven routes and does not include any additional service to Pittsfield, but it gives a very rough estimate of what the improvements necessary to provide additional passenger rail service on the Inland Route would cost. MassDOT identified three major constraints that would need major improvement works in order to provide additional passenger service on the line. These include expanding track capacity on the section of the line between Worcester and Springfield (currently owned by CSX) by restoring a second track on the line; expanding capacity at Boston’s South Station, which currently operates at capacity during the morning peak; and adding a third track on the line between Worcester and Boston.

For more information on East-West Rail and other projects, visit our studies and reports page!